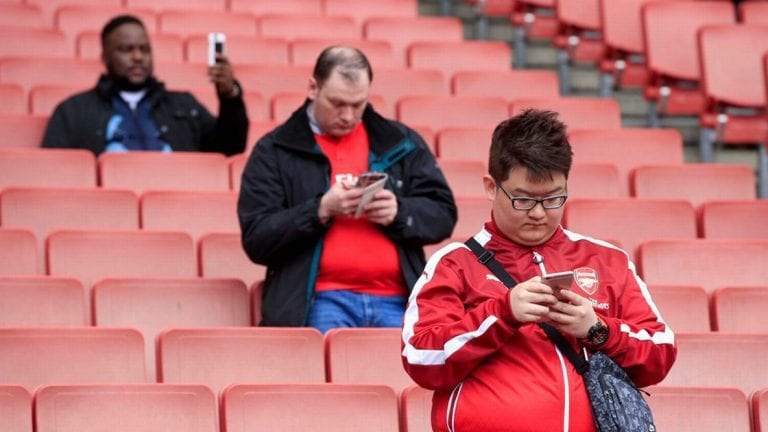 Arsenal fans watched on as their team lost 2-1 to Chelsea.

A pretty even game seeing the Gunners eventually losing at the Emirates.

Although the Arsenal fans felt sure they had been cheated out of a draw, as Joe Willock struck a powerful shot that hit the bar and bounced down apparently behind the line, TV replays showing clearly that the 81st minute strike from the former Newcastle loan signing had indeed been a ‘goal’. However, with no goal line technology or VAR in operation, it was defeat for Mikel Arteta and his team.

The Arsenal fans weren’t happy, nothing new there though.

Defeat to the reigning Champions League winners and having just added a £50m signing (Ben White) to other progressive buys this summer, a bit of perspective needed maybe…?

I know of one fanbase who would be more than happy with that scenario, compared to their nonsense of a summer / club, particularly when Arsenal have the luxury of leaving Joe Willock on the bench for all but the last 20 minutes.

Speaking of Newcastle United…Steve Bruce’s update at the weekend was that NUFC have been doing all they can to sign Joe Willock and other players BUT have not put a single bid in for any player so far.

Work that one out.

With the Arsenal fans I was interested to see what they were saying about Joe Willock now, as even after he scored in seven games in a row for Newcastle, at the end of last season the vast majority of Arsenal fans appeared sure that selling the midfielder was still the best option. A general feeling seemed to be that the goalscoring form at Newcastle was almost surely a one-off, best to cash in on the back of that improvement and goals glut when playing for NUFC.

Moving a few months on now and I think from the comments below, I detect a clear change, with a definite majority seeing the value in keeping Joe Willock and giving him a proper chance.

Actually, most of the comments from Arsenal fans that still were pushing for Joe Willock to go, are either thinking the Gunners’ tactics won’t suit the midfielder or that Mikel Arteta hasn’t got a clue how to use Willock…

Arsenal fans comment on Joe Willock via their Arsenal Mania message board:

‘Changed the game slightly when he came on, brought legs and running, knows where the goal is and looks like his potent patch with Newcastle wasn’t a purple patch.

He’s got most of the tools, would like to see him get a chance with Arsenal this season. Against weaker opposition, a 433 with a midfield of Sambi, Partey and Willock could be really interesting.’

‘Reminds me of the Ramsey situation where he didn’t score much then all of a sudden he suddenly turned into a cheat code (until injuries stopped him).

Willock Scoring 7 on the trot is no luck.

If he played for another team and we were linked with him after the season he had our fans would be hyping him.

Thankfully, he’s an Arsenal player. Unless someone bids 30-40mill there is no reason to consider selling him. Best to give him a chance and see what happens. A goal-scoring midfielder is rare and of special quality that few have. We don’t want to lose it if its in front of our eyes.’

‘Should be starting or close to it, given our current options.’

‘You watch his passing improve exponentially as well. That’s gonna be the real chef’s kiss.’

‘Literally one of the best midfielders in the league on current form. Ah well Elneny it is, he fits the system which is all that matters.’

‘I want him to leave, we won’t give him the gametime he needs to polish those interesting skills. Really feel a season here as supersub will be back to square 1 for his career.

Let him go with a buyback clause or something like that.’

‘Willock needs to play for us asap.’

‘He’s full of confidence right now and not afraid of getting involved in the game. He’s had months of developing since last playing for us and is only going to get better and better. Let’s hope we keep a hold of him.’

‘He seems to have added a bit of composure to his movement.

If he can become reliable in possession then we’ll have a good asset on our hands. Still not convinced with him but I hope he proves me wrong!’

‘Newcastle’s his level. Sell for £20m so we can keep Elneny.’

‘It shows Arsenal have lot of talent in the squad and it’s criminal for Arteta not using this guy.’

‘If we made the move to 433 I suspect Arteta would go for a 433 similar to City where the 8s play as 10s which would still not suit Willock. People would still complain about how he’s playing too high up the pitch and is forced to play back to goal etc. That’s why we are trying to sell this guy and buy 10s.’

‘He won’t be trusted in the pivot so he’ll get thrown in at 10 where he’s terrible and we’ll hear calls for playing him deeper again when he’s not scoring 7 in a row or is averaging 15 passes/90. People will blame the system but even Emery used him the same way as Arteta is doing now.’

‘Had nice goal today which blind linesman ruled out.’

‘Doesn’t matter, what’s important was that he still has that in him, being in the right position and not ****ting himself taking a shot. Was more involved on the ball than before which was the only thing that I didn’t like in his game until now.’

‘I see both ESR and Willock as inside 8s. We’re writing off massive talents because of Arteta’s whiteboard.’

‘I still think he’ll go. Likely a loan if it’s only Newcastle at the table.

Their budget’s only been reported as 10 mil.’