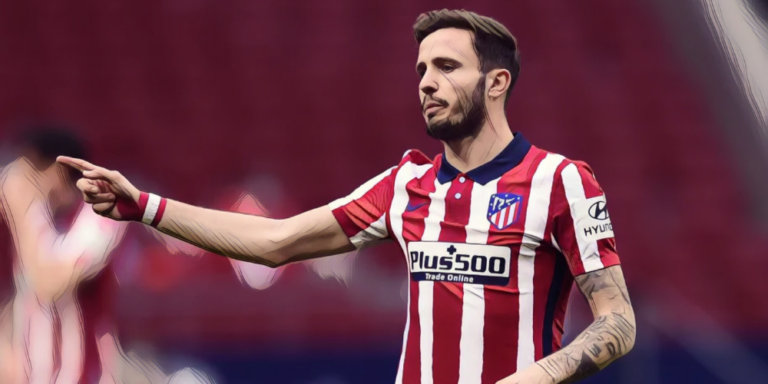 Liverpool are reportedly ‘preparing an offer’ for Atletico Madrid midfielder Saul Niguez, with Manchester United and Chelsea also said to be interested.

The Spain international – who missed out on selection for Luis Enrique’s Euro 2020 squad – signed a unique nine-year deal at the club back in 2017, yet appears to be open to leaving after falling out of favour under Diego Simeone.

Despite a positive campaign for the club which saw them crowned La Liga champions, the midfielder lost his place in starting XI, having previously been a key player for Atletico since bursting onto the scene in 2014.

The 26-year-old – who has racked up 337 appearances for the Spanish club in all competitions – appears to be favouring a move to the Premier League, amid interest from some of England’s ‘Big Six’.

As per Spanish outlet AS, Liverpool are said to be ‘preparing an offer’ of around €40 million (£34.3m) for the versatile midfielder, although the Reds may face competition from both Chelsea and Manchester United, who are also claimed to be interested.

The report suggests that a move to England is his desired destination, with the club willing to allow him to depart for the right price, that figure likely to be much less than his €150m release clause which they accept Is ‘unattainable’.

Atletico are already well-stocked in the midfield department with the likes of Koke and Marcos Llorente, while Udinese’s Argentine talisman Rodrigo De Paul is expected to make the switch to the Wanda Metropolitano.

As for Saul’s possible destinations, Liverpool are keen to sign the player to replace the recently departed Gini Wijnaldum, the Dutchman having joined Paris Saint-Germain on a free transfer earlier this summer.

At Old Trafford, the uncertainty over Paul Pogba’s future has left United potentially seeking suitable replacements, although they have also been linked with Rennes’ teenage sensation Eduardo Camavinga.

Thomas Tuchel and Chelsea are also said to be keeping an eye on the player, the Blues currently with just three senior midfield options in the form of Jorginho, N’Golo Kante and Mateo Kovacic, after allowing Billy Gilmour to join newly-promoted Norwich City on-loan.

Opinion: Jack Grealish is world class, but Man City may not be the ideal home for him

The post Liverpool ‘preparing an offer’ for Atletico Madrid’s Saul, with United and Chelsea also interested first appeared on The Football Faithful.