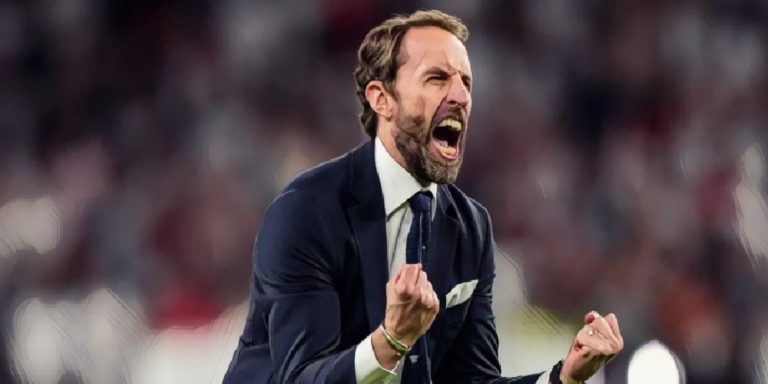 Gareth Southgate hailed England’s ‘resilience’ as they came from behind to beat Denmark to book their place in the Euro 2020 final against Italy and their ‘defensive warriors’.

Having enjoyed a smooth progression to the last four with a 4-0 win over Ukraine in the quarter-final’s, the Three Lions were given a much sterner test at Wembley, falling behind after 30 minutes to a stunning free-kick from Sampdoria’s Mikkel Damsgaard.

However, the hosts hit back soon after, an unfortunate Simon Kjaer bundling the ball into his own net under pressure from Raheem Sterling after a fine pull back from Bukayo Saka, before Harry Kane completed the turnaround in the 14th minute of extra time, the England striker tapping home on the rebound after his contentiously awarded spot-kick effort had been saved by Kasper Schmeichel.

With a man advantage following an injury to Mathias Jensen, England saw the game out professionally as they booked their place in a first major tournament final for the country since 1966, the showpiece set to pit them against a much-fancied Italy side on Sunday.

A victory against Roberto Mancini’s men will be far from easy, not least due to the brilliance of their veteran defensive pairing of Giorgio Chiellini and Leonardo Bonucci – Italy currently on a 33 game unbeaten run dating back to 2018.

Southgate admitted that the Italian’s represent a ‘massive hurdle’ in their bid for Euro glory, although he was also keen to praise the resilient performance of his young side on an emotional night at Wembley.

“I’m so proud of the players,” Southgate said “It’s an incredible occasion to be a part of – we knew it wouldn’t be straightforward. We said to the players we’ll have to show our resilience and come back from some setbacks, and we’ve done that tonight. The most pleasing thing is that we’ve given our fans and our nation a fantastic night, and the journey continues on for another four days.

“There’s one more massive hurdle to try to conquer. Italy are a very good side. They’ve shown outstanding form and have defensive warriors at the back who have been through everything. It’s something to look forward to.”

The 50-year-old was also pleased with his side’s reaction to conceding their first goal of the tournament, as he insisted that despite a far from perfect display, his players ‘found a way to win’.

“I felt calm in the lead-up to the game because I felt the players were ready,” he said. “You’re never 100% sure how they’ll react [to going behind]. But we have talked about it and they stayed calm. I didn’t think they kept the ball well enough and we need to do that better on Sunday. But we found a way to win.”

The post Southgate hails England ‘resilience’ as he prepares to face Italy’s ‘defensive warriors’ in Euro 2020 final first appeared on The Football Faithful.