Ranking the five favourites to sign Eden Hazard this summer 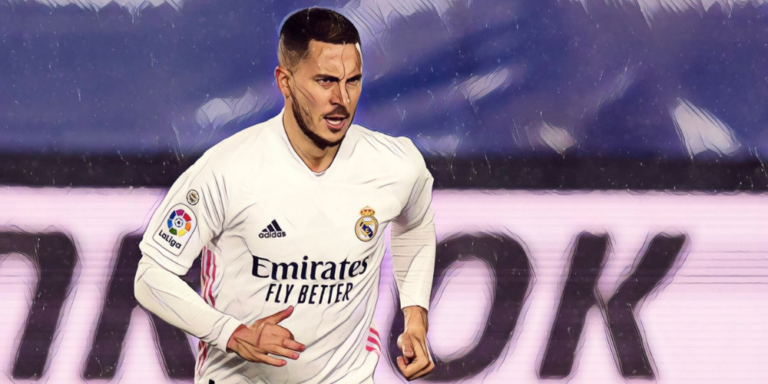 Eden Hazard’s move to Real Madrid has failed to work out as hoped, and if recent reports are to be believed the Belgian’s Bernabeu nightmare could be coming towards an end.

Real Madrid are set for major changes this summer following a disappointing season in the Spanish capital, with Zinedine Zidane having already stepped down from his position as manager for a second time.

Having relinquished the Spanish title to city rivals Atletico Madrid and exited the Champions League to Chelsea, the club’s project is in need of a refresh and several leading names could be made available for transfer in a bid to raise funds.

Hazard has scored just five goals across two injury-plagued season since making a big-money move from Chelsea, and could be sold on this summer to raise funds for Real’s pursuits of Erling Haaland and Kylian Mbappe.

So for those of you interested in the best betting bonuses on offer from sites like 22bet.com, we’ve decided to look at how the bookmakers view Hazard’s future.

Here are the five favourites to sign Eden Hazard this summer.

AC Milan have enjoyed a season of progression this term and competed for the Serie A title for much of the campaign before falling away, though finished the season as runners-up and will play Champions League football for the first time since the 2013/14 campaign next season.

With champions Inter Milan struggling financially and Juventus in a period of transition, now could be the chance to strengthen for Milan as they look to kick on and end a period of mediocrity.

Milan and Real have done plenty of business since the turn of the millennium, with names such as Ronaldo, Kaka, Klaas-Jan Huntelaar and Theo Hernandez amongst the players to have swapped the Bernabeu for the San Siro.

Milan could look to provide another Real Madrid player with a chance to reignite their fortunes, with Hazard having endured an unhappy period in the Spanish capital.

Hazard is priced at odds of 16/1 to move to any MLS club, in what would represent a huge shock given the winger’s age, ability and current status within the game.

Whilst the United States have made plenty of progress in raising the profile of the world game, the MLS would still represent a huge step down for Hazard at an age where he will feel he still has plenty left to contribute.

The 30-year-old will travel to this summer’s European Championship as one of Belgium’s leading lights, where alongside Kevin De Bruyne and Romelu Lukaku will hope to inspire the world’s number-one ranked nation to major tournament success.

Hazard also previously ruled out the prospect of playing in MLS back in 2019, telling Belgian publication, HLN, that he wished to finish his career in his homeland.

Juventus are third favourites to sign Hazard this summer, as the Bianconeri look for new inspiration following a disappointing domestic campaign.

Andrea Pirlo has been sacked after just one season in charge with former Juve manager Max Allegri having returned, following a season that saw the club scrape into the Champions League places after a previous nine-year run of consecutive titles.

Doubts remain over the futures of both Cristiano Ronaldo and Paulo Dybala, the latter having endured a poor return of just four league goals in 2020/21 and entering the final year of his contract at the Italian side.

Much will depend on the new manager’s plans, but coaxing the best from Hazard following an unhappy stint in Spain could help reignite Juventus’ fortunes, as both club and player look to return to former glories.

PSG are perennially linked with household names and perhaps stand as one of the few clubs capable of securing Hazard, even given the precarious financial climate at present.

The French side have been no strangers to spending extravagant sums in recent years, though need fresh impetus after surprisingly falling short to Lille in the title race this season.

Much may depend on the future of Kylian Mbappe who will enter the final year of his deal this summer, with PSG desperately trying to convince their leading light to follow Neymar’s lead and commit his future.

Should a deal fail to be agreed, Mbappe could be sold with Real Madrid appearing his most likely destination, opening up the possibility of Hazard heading to France in part-exchange.

Hazard previously spent five seasons in Ligue 1 at Lille, winning the title in 2010/11 and winning the division’s Player of the Year accolade in consecutive campaigns before joining Chelsea.

Chelsea fans would no doubt welcome Hazard back to the club with open arms, even given the manner of his exit as he engineered his ‘dream’ move to Real Madrid.

Hazard was amongst the best players in world football during seven seasons at Stamford Bridge, winning six major honours – including two Premier League titles – to cement his status as one of the Blues’ modern greats.

The Belgium international was visibly emotional upon leaving the club and retains a strong affinity with both the Chelsea fans and his former teammates, but would a return suit all parties given how the west Londoners have moved on in his absence?

Chelsea’s current wide options include Christian Pulisic, Hakim Ziyech and Callum Hudson-Odoi, the signing of Hazard perhaps not a necessity given the other holes in Thomas Tuchel’s squad.

Hazard did, however, enjoy the best years of his career at Chelsea and would no doubt relish the chance to rediscover himself back at the Bridge should Real Madrid look to cut their losses.

Read – Cherry-Picked: Five brilliant teams that overachieved before being bought up by Europe’s elite

Read Also – Megs! Five players with the most nutmegs across Europe’s major leagues in 2020/21

The post Ranking the five favourites to sign Eden Hazard this summer first appeared on The Football Faithful.

Solskjaer has the all clear to bring defender to Manchester United after German says his goodbyes to fans!