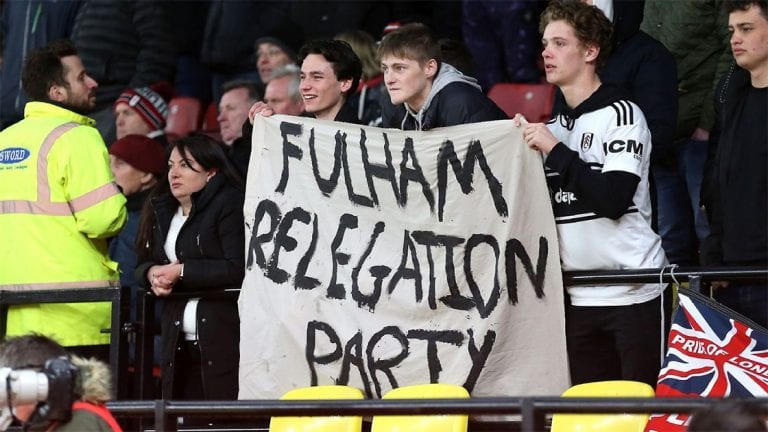 Fulham fans will be present to see the last rites of this Premier League season played out on Sunday afternoon.

Newcastle United the visitors at Craven Cottage in what was billed as a potential relegation clincher for so long.

In the event, these last nine matches have seen seven defeats and two draws as the survival hopes of Fulham fans were swiftly extinguished in the final stretch.

Fulham go into this final game of the season in 18th spot, 11 points adrift of 17th positioned Burnley, 14 points behind Newcastle 15th.

Due to building work at Craven Cottage, a restricted 2,000 Fulham fans will be in attendance.

Ahead of playing this final match against Newcastle, the Fulham fans have still had plenty to say despite their season being over.

Interesting to see them giving credit to Graeme Jones for the relative improvement in results late in the season, rather than Steve Bruce.

The main debate though is all about two former Newcastle United players, with Fulham fans discussing / arguing the relative merits of Scott Parker and Aleksandar Mitrovic.

Many Fulham fans think the media have given Scott Parker an easy ride (something which Newcastle fans can identify with when it comes to Steve Bruce), whilst the idea of Mitro set to leave but Parker staying, is obviously something that many of them wouldn’t choose.

Looking from the outside, Fulham’s season has been very much one of playing a lot of decent attractive football but failing once they get near the opposition goal, how much of that is the fault of Scott Parker and / or Mitrovic (3 goals in 27 PL appearances this season, 13 starts and 14 sub appearances), is one for the Fulham fans to argue about for some time.

A deserved point at Old Trafford in midweek points to maybe what might have been, though at no point in the season did Fulham and Scott Parker find a way to score goals regularly.

‘I expect them to lose to a much improved Newcastle side. Regret to see that Parker is staying.’

‘Lets hope the team want to prove a point and beat Newcastle. Lets show them that on our day, we aren’t the 3rd worst in the league. Well done to the Bees winning today and there’s no reason why we cant end the season on a high.’

‘Next week 7 of the team will leave for their home clubs. Do you expect passion from them when they have been so poor since Anfield.’

‘That is not strictly true as we have an option to buy a number of them and we can take that option up before they leave.’

‘Of the seven, keep three tops, the rest can go, we have just as good players out on loan we can Dominate championship next season hard part is the following season.’

‘In my opinion, Scott Parker will not or is unable to change.

We will continue to weave pretty patterns in our own half until we lose or give away the ball.

Slow predictable build up with no end product.

We do not want expensive loanees who are not particularly interested in playing for us.

With Mitrovic leaving, because of Parker we need to find a mobile striker who can score goals as well as having footballing skills.’

‘If clubs are really after Parker, what are his credentials. He dresses well, he speaks well, he comes up with very convincing augments for why we have not won a game. He is polite to the press, does not slag off his players or the club. He does not lose his temper and is calm and relaxed about everything. He sounds like a perfect manager apart from the fact he does not improve or inspire the players to a level high enough to play consistently well.’

‘Mitro would score 30 goals for us next season if we played to his strengths.

He won’t be here so where are the goals coming from.

A new player perhaps. Some one proven like the Blackburn guy (Adam Armstrong) for 20 mil. Maybe but risky. You can never be sure and Blackburn have learnt to play to his strengths.’

‘Look at 90% of the shots of the crowd these days.. all on their phones. Obsessed we are. We can’t live two minutes without some kind of social media dopamine hit.’

‘Just who is getting a seat for the Sunday relegation party?’

‘Why bother to go and see Parkerball lose another home game 2-0.

Pointless! Taking the p.ss out of the intelligence of our magnificent supporters.’

‘Newcastle are playing flowing football and have found freedom.

They did so by bringing in a new coach.

Parker and Bruce are peas in a pod.

Bore everyone to death and try and win 1-0.’

‘With our home record I predict an easy 3-1 win for Newcastle which represents real progress for us, scoring a goal at home. Parker and Wells, dumb and dumber. Nice coats though.’

‘Three more wins and we would have been going into Sundays game, where beating Newcastle might keep us up.’

‘We all know how we have been cheated out of results against Sheffield United, Newcastle, Arsenal and Burnley away, and home games against Liverpool, Spurs, Wolves, Brighton and Chelsea.’

‘I should not to state a truism but it as truism, the table never lies. In the second half against Man U we looked determined and played in a positive way. If we had played like that all season we would have finished mid table. Scott Parker could not consistently get the team to play at its best, which is what a minor team in this league needs to do.’

‘Well if its true that Mitro is leaving, this is one of the biggest mistakes this club has ever made apart from letting the khans buy the club. Mitro has done more for Fulham than SP has ever done, a proven international goal scorer and yet not good enough for SP and now I see Jose Mourinho wants him at Roma, you just could not make this up.’

‘I think when Parker said we need to think long term, he’s thinking Mitro is not the player he wants, albeit in the short term, he can get us out of the championship.

I think we’d all agree the way Parker wants to play, it does not suit Mitro.

Parker doesn’t like crosses as it increases your chance of losing the ball by 50%.

He prefers possession in our own half until a path way is found, which means he needs a striker with pace and prepared to work hard (not Mitro).’

‘Parker is a nothing manager without Mitro.

Mitro got us into the premiership not Parker.

‘Pity he couldn’t score any to keep us there. Have you considered the possibility that Parker didn’t play him because he is not a premier League player? If he was then why were Newcastle willing to let him go.’

‘Well at least we all know that Mitro will be leaving is official, as he has now stated it in the press, not that we couldn’t see this coming a mile off. Also although he has been offered, according to the press, a club abroad, he has apparently said that he and his family have settled down here in London, and he would rather go to another London club, and it is understood that West Ham are showing an interest. Wouldn’t it be ironic, if he did go there and David Moyes turned him into a scoring machine. Wherever he goes, I would like to wish him the best of luck, and a big thank you, for what you have done for our club, and he will always be a legend in Fulham’s history, and those 26 goals last season, will never be forgotten. Bless you Mitro and good luck in the future.’

The post Fulham fans comments ahead of Newcastle – Plenty to say despite relegation already done appeared first on NUFC The Mag.