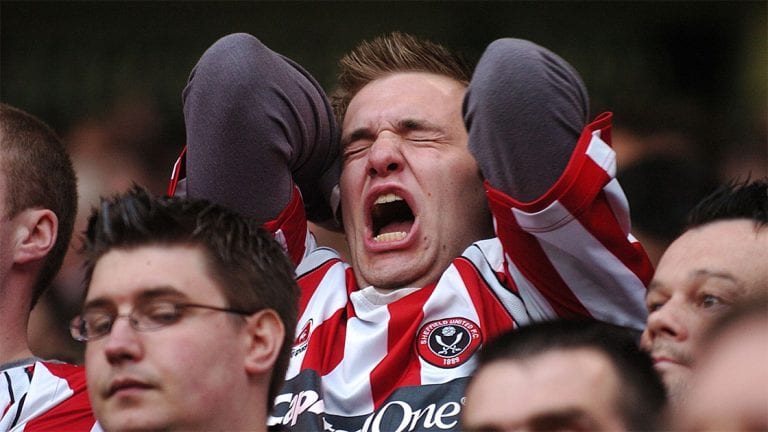 In the pre-match comments, it was clear that many Sheffield United fans obviously think that they are an authority on Newcastle United supporters.

Considering it is 11 years since Sheffield United fans visited St James Park, that is maybe a ‘little’ surprising…

Indeed, since 1993, Sheffield United fans have only twice been inside St James Park for a league match.

With such a scarcity of meeting up on Tyneside, you have to wonder exactly how many Sheffield United fans decide on such strong opinions regarding Newcastle fans…

Watching Sky Sports and in particular, tuning in to Talksport, would appear to be the most likely.

Wednesday night once again saw no Sheffield United fans inside St James Park but after watching on TV, they once again had plenty of strong views regarding matters on and off the pitch.

Sheffield United fans commenting via their S2 4SU message board:

‘Got no sympathy for Geordie’s at all

For all their bluster about getting Ashley out, what do they do about it? Sit and clap.

We’ve seen protests up and down the country from real fans who love their club but the barcodes are happy to just sit and accept it.’

‘I don’t know why Steve Bruce gets such a bad rap. He has to do a lot with little (in Premier League terms) and he fashions a way of playing which is simple yet effective at times, and always works against us.’

‘Newcastle are a big club with a lot of fans but they would need a significant amount of investment to get close to the top 5-6.

They aren’t even really that close to teams like Leicester really.

Still you do sense if they got owners in who did invest it could be a really powerful side when you look at sides like Leicester and Wolves who have had that kind of investment.

Bruce will remain and rightly so despite the criticism he receives and will hope the off-field stuff is sorted.’

‘Don’t think it would have done us much harm to bring on Brunt and Seriki earlier. Brunt has excellent vision, a great touch and can shoot from range. Newcastle were knackered at the end, but we were also needing some energy and attacking quality. Disappointed he didn’t get on.’

‘We aren’t actually that much worse than Newcastle. The difference is they have 2 really top class players in Saint maximan and willock who were head and shoulders above anyone else on the pitch.’

Miles better than every other player and on a different level to our sloths.

He has caused us problems every time he plays against us. He does to others too. Fast, tricky, strong, goal threat. A joy to watch and we have no one close to him in our side. He is a different league (literally now) to our players. Watching Egan, Stevens and Basham trying to stop him was a bit embarrassing.

Willock was the next best player on the pitch. He was always looking to create or make things happen and clearly can score goals as he is showing.

The rest of the side were competent but did not need to do much really.

The wing backs both put decent crosses in. Not sure we put one good cross in all night.

Opponent Weak link – Almiron just kept looking for free kicks and did not stay on his feet. I felt the defence was also there to be got at but we never threatened really at all.’

‘They always seem to be dull like today’s game, I can’t remember a decent game between us and Newcastle.’

‘When we beat them in 1994, the Lane went bananas when Nathan Blake scored late to make it 2-0 and we all thought we were staying up…’

‘The reverse home fixture this season was a great game, we were brilliant, ran them ragged from start to finish.

I thought it was the start of a resurgence….sadly it wasn’t.’

‘Those early seventies games were brilliant Geordies always up for a battle, nowt to do with the football though.’

‘I’m sure John Tudor scored for Newcastle against us in one game.’

I didn’t see or hear any protests. Gordie myth.’

‘They were there for the taking. Sums up our season. Just lacking that extra bit of quality. Super frustrating!’

‘Maximam deserves his praise when he runs at people.

But all this interpretive dance b.llocks needs smashing out of him.’

‘In my day st maxiw.nk would be in row Z within 5 mins of doing that w.nky riverdance then a basic no look pass.’

‘Should be clobbering Maximum as a Minimum.’

The post Sheffield United fans – Plenty to say about Newcastle United fans and club after 1-0 loss appeared first on NUFC The Mag.