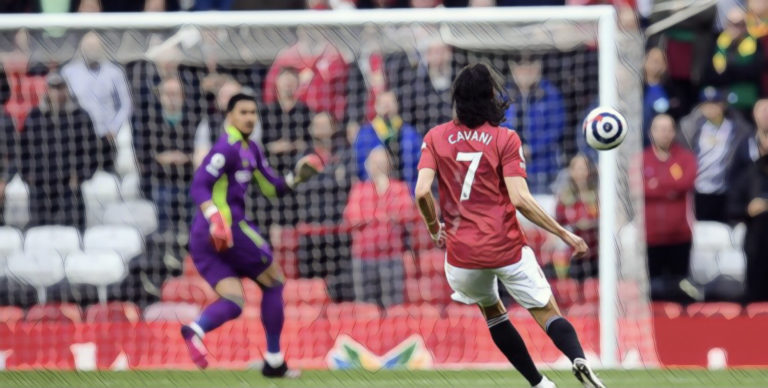 Manchester United continued their stuttering end to the season, after slipping to a 1-1 draw with recently relegated Fulham on Tuesday night.

The Red Devils penultimate clash of the league campaign saw home supporters welcomed back to Old Trafford for the first time since March 2020, with United looking to avoid a third successive defeat in the space of a week on their own turf.

After a dominant start for the hosts, the 10,000 in attendance were then treated a real piece of magic courtesy of the in-form Edinson Cavani. The Uruguayan – on his first appearance in front of the home support – catching Alphonse Areola off-guard with a sensational 35-yard chipped effort.

The home side’s dominance was almost rewarded with a second, yet Areola recovered well to save from a long-range Bruno Fernandes strike, before the visitors had a rare, golden opportunity to draw level. 18-year-old forward Fabio Carvalho – who netted against Southampton on his first top tier start at the weekend – breezed past Victor Lindelof in the United box, yet saw his relatively tame effort comfortably saved by the returning David De Gea.

United continued to probe for a second after the interval, seeing Fernandes twice go close from a free-kick, while at the other end the Cottagers also conjured a chance of their own, Carvalho’s header once again well saved by De Gea, after an initial good stop from the Spaniard to deny Ademola Lookman from the angle.

Goal of the Season?

Edinson Cavani lobs Alphonse Areola from distance to give #MUFC the lead at Old Trafford!pic.twitter.com/r0wSkpBu39

Ole Gunnar Solskjaer’s men then squandered their best chance of the half, Mason Greenwood uncharacteristically firing straight at the ‘keeper after an excellent through ball from Cavani. The teenager was made to pay for that miss just moments later as Fulham netted a shock equaliser, last season’s play-off final hero Joe Bryan heading home at the back post after a well worked cross by Bobby Decordova-Reid.

That proved to be the last real moment of the match as Scott Parker’s side held on for a spirited draw. While skipper on the day, Bruno Fernandes was seemingly delighted to see the return of the home support for the first time in 14 months, he admitted his disappointment that United couldn’t cap the night off with a win.

“It was really good [to have fans back]. It’s such a good feeling you know,” Fernandes told BBC’s MOTD.

”We know how important fans are to football so it was really nice to have them back. We didn’t give them what we wanted with the victory.

“We pressed a lot. We had many chances to do it but we don’t do it. You shoot, you try and the ball doesn’t go in but sometimes that happens. We’ll put our heads down and focus on the next game.

The hosts were also perhaps fortunate to see their opener not chalked off, with it up for debate as to whether Fernandes played the ball through to teammate Cavani. While VAR seemingly deemed he had done so, which ultimately kept the goalscorer onside, the Portugal international admitted that the officials may have got the decision wrong.

“Honestly I didn’t feel the touch. The referee said I touched the ball. How it is, I don’t care honestly. I always say the most important goal is the one that hits the net, it doesn’t matter who gets the goal or the assist.”

United round off their league campaign away to Wolves on Sunday, before taking on Villarreal in the Europa League final on 26 May.

The post Fernandes disappointed Man United couldn’t give fans a winning return against Fulham first appeared on The Football Faithful.