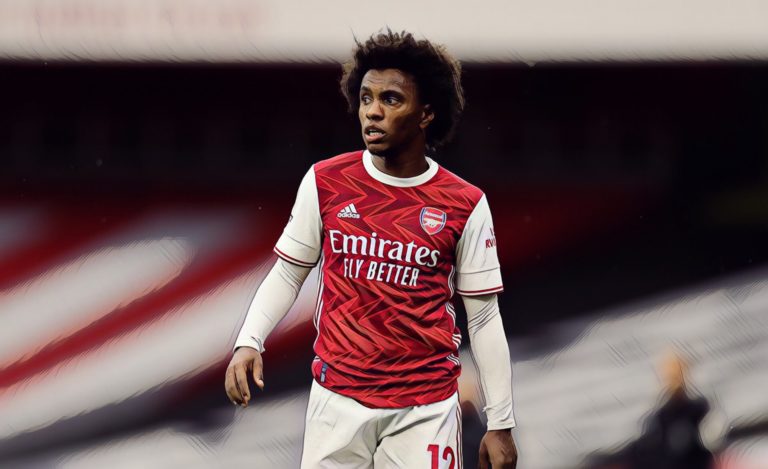 We’re approaching the end of the 2020/21 Premier League season, a unique and unprecedented campaign that has seen Manchester City reclaim their position as England’s finest with title success.

The three relegation places are already confirmed with last season’s overachievers Sheffield United heading back to the Championship, the Blades joined by Fulham and West Brom who drop down in instant returns to the second tier.

There’s still plenty to play for in the race for Champions League football and European qualification, and as we enter the final stages of the season we’ve decided to look back and reflect on the campaign.

One season can prove an awfully long time in football and this list of players have seen their fortunes suffer a sharp downturn during the current campaign, here are five stars whose stock has fallen massively this season.

Many were questioning the wisdom in Chelsea allowing Willian to leave on a free transfer last summer, the winger having been amongst the Blues’ finer performers over the second half of the 2019/20 campaign and had enjoyed the best goalscoring league season of his seven-year spell at Stamford Bridge.

Chelsea had refused to hand the 31-year-old the three-year deal he was demanding and the west Londoners’ loss was viewed as Arsenal’s gain when they captured the Brazilian as a free agent.

Willian was tipped to be a shrewd acquisition for a transitional Gunners side seeking experience and creative quality, but after shining on debut at Fulham he has faded into the background for much of the campaign.

The winger has scored just one league goal – in the win over West Brom this month – and has struggled for regular opportunities over the second half of the campaign, starting just two of the club’s past nine league fixtures with the emergence of Emile Smith Rowe and the winter window loan of Martin Odegaard providing obstacles in his path to first-team football.

It looks unlikely that Willian will force his way into Mikel Arteta’s plans following a disappointing season and Arsenal now have an underperforming and ageing asset with two years left to run on his contract.

Regarded as a bargain buy just last summer, recent reports have suggested Willian could be open to leaving the Emirates at the end of the season and there are unlikely to be too many of an Arsenal persuasion upset should he depart.

Timo Werner’s season may end in silverware success with Chelsea into the finals of both the FA Cup and Champions League, but it has been a testing campaign for the forward since his £47.5m move from RB Leipzig.

Werner was strongly linked with a move to Liverpool last summer and came close to moving to Merseyside before heading to Stamford Bridge, his signing viewed as a coup for the big-spending Blues with the star’s reputation having flourished in the Bundesliga.

Werner departed the Red Bull Arena as Leipzig’s all-time leading scorer and on the back of scoring 34 goals in all competitions last season, but his prolific record has failed to be replicated during a challenging campaign in the Premier League.

Yes, Werner’s tireless work rate is admirable and his pace a major forward threat, but there’s no doubting that Chelsea supporters expected much more despite his contributions this season.

The 25-year-old has scored just six league goals, a figure that ranks him below names such as Stuart Dallas, Anwar El Ghazi and David McGoldrick, whilst his catalogue of improbable misses could make a more than watchable Christmas DVD.

To his credit the forward continues to get himself into good goalscoring opportunities and with a season of adaptation under his belt could hit the ground running next season, but the ruthless goal machine many had hoped for has not been seen at Stamford Bridge this season.

Whilst the club’s defensive injury crisis and subsequently patched-up back four have drawn most of the headlines this season, Liverpool’s fabled front three has failed to fire as expected this term.

Mohamed Salah has continued his remarkable consistency and is the joint-leading scorer in the Premier League this season, but supporting cast Roberto Firmino and Sadio Mane have fallen below expectations.

Mane was arguably Liverpool’s most influential player for much of last season, being named as the PFA Fans’ Player of the Year and scoring several vital goals on the club’s way to title success.

“There is no problem there…”

After netting 20+ goals in each of the past three campaigns, Mane has 14 for the season so far in all competitions with just nine in the Premier League – his lowest total since signing for Liverpool in 2016.

More than a tangible drop in output, however, the sharpness of his game has been missing for much of the campaign, the electric explosiveness that has defined his play replaced with sluggish performances and complacent first touches.

Liverpool will hope his season has been little more than a blip, but there are several shouting for change and a refresh in the Reds attack next season.

Anthony Martial has just never been quite capable of fulfilling his potential, his Manchester United career having meandered between strong showings and displays of frustrating inconsistency.

Stuck between a wide role and centre-forward position, he was finally handed his chance as a number nine last season and thrived as Ole Gunnar Solskjaer’s main man, scoring 23 goals in all competitions to be named as the Red Devils’ Players Player of the Season.

His season began poorly with a red card in a 6-1 defeat to Tottenham, whilst spells out through illness and injury have contributed to just 17 league starts and only four goals.

Martial’s absence has coincided with Edinson Cavani growing in influence, the veteran the perfect example of centre-forward play with his intelligent movement and the difference between the duo has often been stark.

Cavani provides everything Martial has rarely done, linking the play brilliantly and creating opportunities for himself by simply being in the right place at the right time, trade tricks learned from more than a decade of goalscoring at the highest level.

Martial has played over nine hours more football than the veteran Uruguayan this season and boasts less than half of his overall goal tally, hopes of him becoming the centre-forward to lead this side to silverware ever fanciful at best.

Manchester City’s successful season means Raheem Sterling’s drop in performances has gone under the radar a little more than some of the other names on this list, but the winger has seen his status slip at the Etihad of late.

Once arguably the first name on the team sheet – Kevin De Bruyne aside – and one City’s most influential players, Sterling has struggled this term and has found himself on the fringes in recent weeks.

Phil Foden’s continued upward trajectory and Riyad Mahrez’s excellent individual season has seen the England international slip down the pecking order, with Sterling having featured for a total of just eight minutes across Manchester City’s four fixtures in the Champions League’s quarter-finals and semi-finals.

His drop is reflected statistically in the numbers too and whilst 10 goals and seven assists is a more than respectable tally for a wide player in the Premier League, it’s a huge decrease from Sterling’s 31 goals in all competitions last term – including reaching 20 in the league for the first time.

Out-of-sorts for much of the campaign, could Sterling’s England place – once unquestionable under Gareth Southgate – now be at threat? The 26-year-old faces strong competition from the likes of Foden, Jack Grealish, Marcus Rashford and Jadon Sancho ahead of this summer’s European Championship.

Read Also – Iconic Performances: The memorable night in the San Siro when Bale announced his genius

The post Five Premier League players whose stock has fallen massively this season first appeared on The Football Faithful.