by Darren Looney
in Football
0 0
0 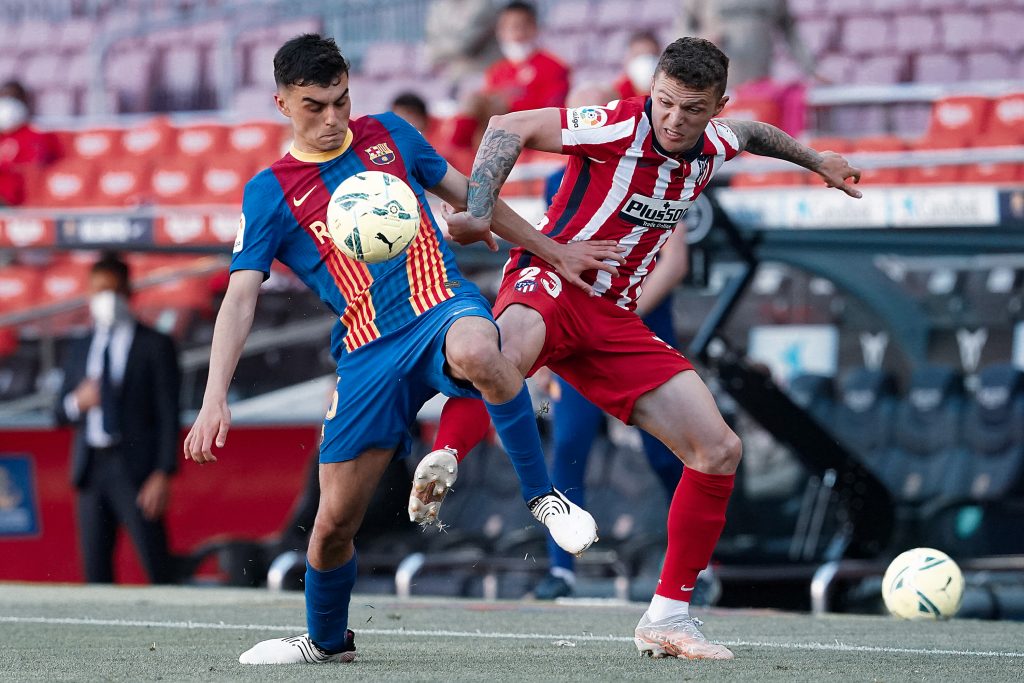 The weekend La Liga fans have been waiting for has arrived. Lauded by many as the round where the title could be decided, the questions going into the weekend were endless. Who would take control? Will Barcelona falter in another big game? How tired are Real Madrid? Will Luis Suarez haunt his former club? The answers would come over two days as Barça and Atletico Madrid kicked it all off.

Barça went into the game knowing they had to win, but it would have been helpful if someone told them that fact by their first-half performance. Atletico controlled the first 45, offering a big threat on the counter and were defensively compact but suffered very little. The hosts struggled once again with the opposition transitions and were anonymous going forward themselves, leaving it 0-0 at the interval.

The Catalans started the second half playing deeper. Ronald Koeman’s way of easing the threat of Atleti’s counters came good around the hour mark resulting in a good chance for Illaix Moriba. The rest of the half petered out without any real drama, with the best chance for Barça coming through Ousmane Dembele, who should have done better with a free header. The result does not do either of the sides any favours in the title race with three games remaining.

Here are the key takeaways from Barcelona’s season-defining clash with Atletico Madrid.

For Barcelona, the tie was a must-win to gain some control over where the La Liga title will end up this season, under the circumstances of multiple teams being involved in the race. Moving ahead of one would have been a monumental step in the race and might now be seen later on as another missed opportunity.

The road to the title looks very tough for the Garnet and Blue, with their head-to-head record being abysmal against both Madrid sides. There is now very little time remaining to fix up with only three games left and not much control in their hands either way.

The draw ultimately benefits none of the two teams. Real Madrid now hold an advantage over both their rivals on head-to-head wins, pending a victory over Sevilla at Valdebebas on Sunday night.

Barça’s run-in is not very difficult, but the conditions required to lift a 27th La Liga title look bleak. Assuming Real Madrid win tomorrow, the Catalan side would need both Madrid sides to lose a match, with Ronald Koeman’s men needing to accumulate maximum points here on out.

A constant theme present throughout the reign of Ronald Koeman as Barcelona manager is his sides failure to show up and get a result in big games, with today’s match being no different.

The Blaugrana looked like a team who already had the title wrapped up in the first half, lacking any drive and ambition to work towards a solution to breaking Atletico Madrid down. It took 28 minutes for Antoine Griezmann to have his side’s first shot on target, and only a Lionel Messi shot would follow in the remainder of the half. Defensively, the Catalan side once again looked shaky in dealing with fast transitions, and overall, looked somewhat like a team unprepared for what they were facing.

The second half saw the Blaugrana side improve with Barca emerging as the better team both offensively and defensively. The best of the chances fell to Ousmane Dembele, whose header flew over the crossbar, with the remaining chances laying in the lap of Lionel Messi and Illaix Moriba.

Barcelona’s record this season in big games is nothing short of shocking. Outside of the Copa del Rey run, they have won once in six encounters against their fellow La Liga title challengers, one in four against the elite teams of the Champions League and a Supercopa de Espana final defeat to boot. Although penned down as a transition season before a ball was kicked this season, this is not good enough for a club with Barcelona’s ambitions.

The single point Barcelona gained against both Madrid sides this season is the worst return the club has seen since the 1964/65 season. A damning stat in a title race where the Catalan side look likely to come up short.

Asking too much of the Youngsters

A shining light on this season for Barcelona has been the emergence of an abundance of youth in the squad. Frenkie De Jong, Pedri, Oscar Mingueza and Sergino Dest have amounted a serious number of minutes on the pitch this campaign to the point where they have looked drained and tired. In recent weeks some of these names have fallen to these circumstances. There was a touch of that in this game, but is the responsibility put on them in these big games too much?

On the flanks, Yannick Carrasco had his way with both Dest and Mingueza. The Belgian got in behind multiple times and created Atletico Madrid’s biggest chances in the first half. Both had the responsibility to stop this avenue of attack and failed to do so, resulting in both being taken off before the full-time whistle.

In these big games where the midfield battle is crucial, it asks a lot of two youngsters to control the game, and without Sergio Busquets today, their failure to do so was evident. This has not been the first time this season, with Real Madrid away and PSG at home coming to mind.

They are being asked to do multiple game-defining jobs. When faced with experienced opponents like a Casemiro or Koke, they do not have their own experience to navigate their way around the difficult tasks that emerge in-game.

These battles have been crucial in Barcelona’s big games this season, and the failure to win them have had a noticeable effect on the results. This is not any player’s fault; however, just an observation that Ronald Koeman needs to take some responsibilities off their shoulders, whether through a formation change or new players, remains to be seen.