by Michael Gathige
in Football
0 0
0 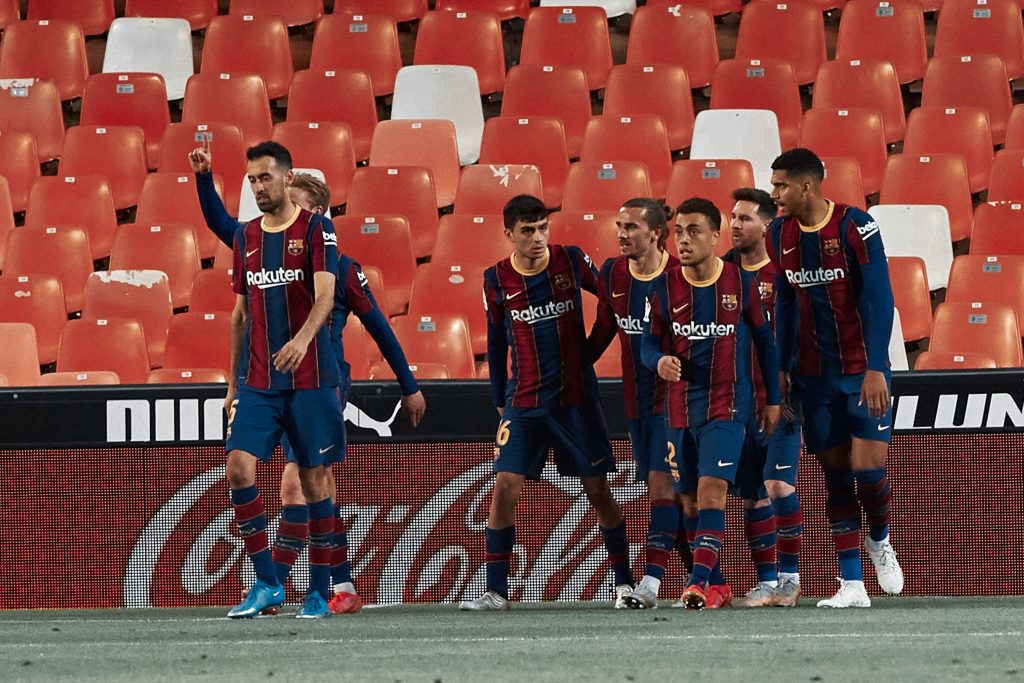 Subsequent to their 2-3 away victory at the Mestalla, Barcelona turn their attention to the biggest remaining clash of the season. The Catalan kings host Madrid giants Atletico de Madrid in a do or die encounter at the Camp Nou.

The last time Fútbol Club Barcelona and Atletico de Madrid squared off, Ronald Koeman’s forces succumbed to a 1-0 defeat in the Wanda Metropolitano thanks to a Yannick Carrasco goal. In and of itself, the goal was rather unconventional. Due to a crude moment of miscommunication between Gerard Pique and Marc-Andre ter Stegen, the Belgian capitalised, nutmegging the goalkeeper, then slotting the ball into the gaping net.

Heading into Saturday night’s late game, both sides find themselves in fairly similar form. Over the course of the past four months, Barcelona have, without a shadow of a doubt, been La Liga’s best side. Winning 49 points from a possible 57 in this period, the Blaugrana are rivalled only by Sevilla with 44 in that time frame.

The Catalans have emerged victorious in nine of their last twelve appearances, scoring 30 goals and conceding twelve in the process. This is a run of form that has seen them win the Copa Del Rey, and should the Garnet and Blue emerge victorious against Los Colchoneros, depending on the results of their counterparts in the other fixture, then they might just end the night top of the table.

Atleti have been formless for quite some time now. Since January, they have won 12 matches, drawn five, losing three in the process. This form has seen them win 41 of the 60 available points. When considering how brilliant a start they had to their domestic campaign, this is certainly not the return on points they would have envisaged.

Since the New Year, they have scored 34 at 28.91xG, conceding 17 at 20.47xGA. Their Expected points (32.57) would suggest that Los Rojiblancos are yet to put an end to their overperformance. They have superseded expectations by a staggering 8.4 points, but given the fact they face the most in-form side in La Liga, this should come back to bite them.

What to expect from Barcelona?

Even after the defeat to Granada, Barcelona showed their fierce attitude and their ability to claw their way back from a deficit. Despite going down early on, Barça came from behind, scored thrice and returned home with the three points intact. Up against Atlético, Barça will have an entirely new set of problems they have to encounter, and the team’s chances of winning will need everything to be done at the highest possible level.

Los Rojiblancos have kept more possession than the division’s top 6, not once in the second half of the season. Keeping in mind their approach against the “big sides” is constant, one should expect much of the same tomorrow.

Given Sergiño Dest’s injury problems, Barça will have to adjust their line accordingly, preferably with a 4-3-3. Oscar Mingueza should take his place in the right-back role, while Gerard Pique and Clement Lenglet take the reigns in the back two. Jordi Alba, ideally, should preserve his place in the fullback role. While in Midfield, Ronald Koeman should keep his best midfield trio intact, even though Pedri looks exhausted beyond belief. In attack, Ousmane Dembélé, Lionel Messi and Antoine Griezmann should start in this case.

Martin Braithwaite has been called up as part of the squad list after missing the last couple of games due to injury, and his involvement in the second half, given it comes in time, could be handy for Barcelona in this game.

As per the playing style, the Catalans have every obligation to be true to their style. An asphyxiating press, fine-tuned passing as well as the players impeccable positioning have made for some mouthwatering ties against stern opposition this season. This is the best way to guarantee victory, especially against such a frustrating rival.

What to expect from Atletico Madrid?

Taking into consideration how well the season began for them, Atletico Madrid have done an excellent job at shooting themselves in the foot. Had they maintained their form from the first 19 games of the season, they would have been crowned champions for the eleventh time; and second in the last eight years. Their over performance was inevitably going to catch up to them, and it hit them hard. In the 15 matchdays since the second half of the season began, they have collected just 26 points, drawing five and losing three in the process.

With Diego Simeone in the dugout, Los Colchoneros have the second-highest goal tally in the league in the current campaign, with 61. In addition to this, they boast La Liga’s best defence, with just 22 goals conceded this season. While not famed for their ball retention, however, they do keep a fair share of it, with 52.69% of the ball on average this season, the eighth-highest number in the league.

Offensively, Cholo’s forces average 4.8 shots on target per match, which then translates to scoring an average of 1.8 goals per game. Both stats rank second in the league, which for a side challenging for the title, is perfect. Luis Suarez leads the way in goals scored for Los Rojiblancos this term, with 19 in 28 appearances for the red and whites. Despite his role as a midfielder, Marcos Llorente has the second most goals for Atleti, with 12 and the most assists, with 10 to his name.

Their defence is easily one of, if not the best, in the Spanish top flight. They average the least goals conceded per match at an impressive 0.6 every 90 minutes, keeping a whopping 17 clean sheets this term. The Madrid side’s style of play has them conceding the 4th least penalties in the division at 7, thanks in large part to their excellence in tackling.

Los Rojiblancos generally line up in a 3-5-2, which, depending on the circumstances of the game, can morph into a 4-4-2 low block. Their previous game against Barcelona served to show just how compact a unit they are in defence. They are highly likely to play in much the same way, with a deep block, a host of long balls, but as was the case, and as has been Barcelona’s weakness this season, with frustrating saves from La Liga’s best goalkeeper Jan Oblak.

In Atletico Madrid’s pursuit for their eleventh La Liga title, not many individuals have been as crucial to Los Colchoneros’ title push as him. With a staggering 12 goals and 11 assists this campaign, Llorente has been sensational in the Atleti midfield. He has a commanding offensive presence and is more than capable of turning any situation into a goal worthy opportunity.

One of the more dynamic midfielders in Atletico’s system, and La Liga as a whole, he should be handled with utmost caution. Frenkie de Jong, especially will be crucial as the two get ready to lock horns. One mistake on Barcelona’s part in marking could spell the end to their title hopes.

Under pressure, the team overcame immense pressure to win the final three rounds of the Copa Del Rey. They also trounced Real Sociedad and made a mockery out of Sevilla, both away from home. The Blaugrana have beaten all but two of the current top 6, and this is a chance for them to stake their claim as potential champions. Honour, pride and silverware are all on the cards in this tie, and Barça should win it.