Klopp says PL will be even ‘harder’ for Liverpool next season 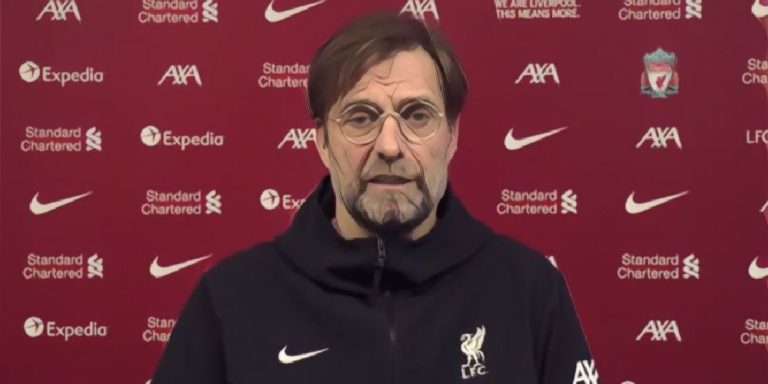 Jurgen Klopp is anticipating an even harder task in the Premier League next season, amid what’s been a truly underwhelming campaign for the champions this term.

After securing a first league title in 30 years in sensational style in the previous campaign, the Reds looked well-placed to secure back-to-back titles earlier this season, having been three points clear at the top of the table at the turn of the year.

Having initially dealt with the absence of Virgil van Dijk and fellow centre-back Joe Gomez admirably, the spiralling injuries finally started take their toll after Christmas, Liverpool going on to slip to six successive league defeats at Anfield, the first time that has happened in the club’s history.

Such a drop off has now left the Merseyside club scrambling just to secure a top-four spot and a place in the Champions League next season, the Reds currently in sixth and four points off a resurgent Chelsea side in fourth.

While Klopp will be hoping to start afresh next season and welcome back the likes of Van Dijk, the German has admitted he’s expecting the top-flight to be even tougher next term, with a number of sides on the rise.

“It is always harder because Man City never stops; I think it is clear that they will not,” said Klopp at his pre-match press conference. “But even though they had two years in a row where we had them neck and neck, and one year we were ahead of them, we never expected that to happen for the next 10 years in a row.

“Manchester United is coming up, everyone can see that, Chelsea is in a brilliant place with a top squad. I have said it before, the squad [Thomas Tuchel] inherited is a present, so it will not get easier.

“We speak only about City but there will be other teams, for sure. You have to deal with all the other teams who, even when they are outstandingly strong, you can say they are a little bit under the radar like Leicester. They have a brilliant manager and a really good squad. No one should write off Arsenal or Tottenham. Obviously, West Ham are flying, so how can it be easier? It is not only Manchester City to worry about.”

Although their poor form in 2021 has made securing a top-four spot looking increasingly unlikely, the Liverpool boss is not giving hope yet that his side can be in Europe’s elite competition next season. However, Klopp admitted that winning all five of their remaining games won’t necessarily be enough, with the club relying on other sides dropping points.

“The Europa League is a great competition but I haven’t thought it through because, even though it is not likely, I know that there is a little chance for the Champions League as well, so let’s give a try and think about what happens next season.

“Five wins won’t be enough [on it’s own], it depends how the other teams do obviously, but without five wins we don’t have a chance. If we are five points behind with 15 to play for, why would we write it off? Man United still thinks they can become champions, rightly so, so we think we can still go to the Champions League, but we still need results in other games. We know that. Without winning your own games you won’t go anywhere.”

The Reds take on second-placed Manchester United on Sunday as Klopp looks to end his Old Trafford hoodoo.

See also – Klopp admits Van Dijk, Henderson and Gomez are still ‘quite a way’ from return

The post Klopp says PL will be even ‘harder’ for Liverpool next season first appeared on The Football Faithful.